HONG KONG: The QIMR Berghofer Medical Research Institute (QIMR Berghofer) in Australia and the Li Ka Shing Faculty of Medicine of The University of Hong Kong (HKU) have entered into an important agreement that will give patients in Hong Kong and Australia access to a ground-breaking cancer treatment. The MOU also initiates an advanced training programme for Hong Kong clinical or science graduates on the production of clinical grade “killer T-cell immunotherapies”.

The two sides signed a memorandum of understanding at a ceremony in Hong Kong today attended by His Excellency the Governor of Queensland, the Honourable Paul de Jersey AC.

Scientists from the two institutions are joining forces for the second phase of a clinical trial using immunotherapy for the management of nasopharyngeal carcinoma (NPC), which is an aggressive upper respiratory tract cancer common among people from East Asian countries including China, Indonesia, Thailand, Philippines, Vietnam and Singapore.

“The phase I trial which started in 2009 involved late-stage NPC patients, and even though the primary endpoint of Phase I trial was safety, we found that this cell-based therapy, on average, improved their life expectancy. The overall survival rate of immunotherapy patients in the Phase I trial was 523 days, compared to only 220 days among patients who did not receive the treatment. In the new trial, by offering this cell-based treatment in the earlier stages of the disease, we hope to further improve the survival rate,” Professor Khanna from QIMR Berghofer’s Tumour Immunology Laboratory said.

30 newly diagnosed patients with metastatic NPC at the Queen Mary Hospital in Hong Kong and others in Australia will be involved in the Phase II trial beginning in September 2015. The presence of Epstein-Barr virus (EBV) in NPC tumour cells provides the immunotherapy target. Phase II patients will undergo the standard chemotherapy and radiation treatment regime while their own cells are being prepared to fight the cancer.

“In the Phase I trial, blood samples were taken from patients before treatment started and sent to QIMR Berghofer’s Brisbane laboratories. Our scientists then extracted T-cells – a type of white blood cell –which were nourished in the laboratory and primed to attack cells infected with the virus, honing in on malignant cells while leaving normal cells intact,” Professor Khanna said.

Professor Frank Gannon, Director and CEO of QIMR Berghofer said, “Manufacturing the killer T-cells takes two weeks, and another fortnight in rigorous testing before the cells are shipped back to the hospital for injection back into the patient. The early clinical trial demonstrated that this treatment is safe.”

Professor John Nicholls, Clinical Professor at the Department of Pathology, Li Ka Shing Faculty of Medicine, HKU said, “Up to six killer T-cell infusions will be given to patients over a period of 12 weeks. The patients will then be monitored and given standard treatment if their disease progresses.”

“When the immunotherapy collaboration with HKU began eight years ago, it was intended that the technology developed at QIMR Berghofer would be shared with Hong Kong, where there are more NPC patients. ZeShan Foundation in Hong Kong supports the Phase I clinical trial. With another generous donation by the Foundation we are able to begin training clinical or science graduates from Hong Kong in clinical grade T-cell stimulation,” Professor Khanna said.

Training will be conducted at the Institute’s manufacturing facility, Q-Gen, which recently became the first in Australia to be granted regulatory approval by the Therapeutic Goods Administration (TGA) to prepare clinical grade T-cell therapies.

This training programme will enable Hong Kong graduates to master scientific techniques of producing clinical grade killer T-cell immunotherapy. The two sides are exploring the possibility of establishing an accredited laboratory in Hong Kong similar to Q-Gen so that blood samples could be processed in Hong Kong.

QIMR Berghofer Medical Research Institute is a world leading translational research institute focused on cancer, infectious diseases, mental health and a range of complex disorders. Working in close collaboration with clinicians and other research institutes, our aim is to improve health by developing new diagnostics, better treatments and prevention strategies.

About The Li Ka Shing Faculty of Medicine, The University of Hong Kong

Li Ka Shing Faculty of Medicine, HKU, is the oldest local institution of higher education in Hong Kong. It was founded as the Hong Kong College of Medicine for Chinese in 1887, was renamed as the Hong Kong College of Medicine in 1907 and became the premier founding Faculty when the University was established in 1911. From its modest beginnings, the Faculty has grown to become the largest faculty of the University, with over 400 full-time academic and academic-related staff and 800 research and research-related support personnel. The undergraduate student population is about 2,900 and postgraduates number 1,500. The Faculty is comprised of 14 departments, School of Biomedical Sciences, School of Chinese Medicine, School of Nursing, School of Public Health and a number of strategic centres of research excellence. 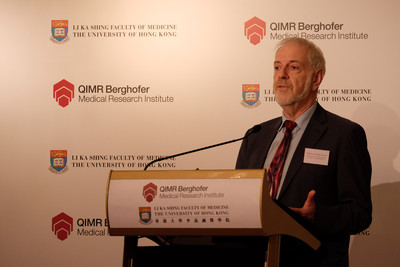 Prof Frank Gannon, Director and CEO of QIMR Berghofer Medical Research Institute on its work and the importance of the collaboration with HKU 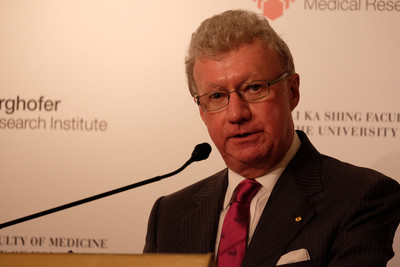 His Excellency, the Honourable Paul de Jersey AC calls for the strengthening of relationship between Queensland and Hong Kong 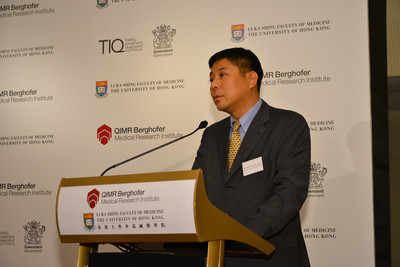 Mr Roy Chen of ZeShan Foundation, which has donated generously to the study, this time to train Hong Kong clinical and science graduates on immunotherapy at QIMR Berghofer 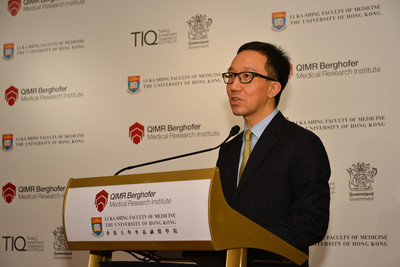 Prof Gabriel M Leung, Dean of the Li Ka Shing Faculty of Medicine, HKU, describes the collaboration as a small beginning to something potentially very big and very impactful. 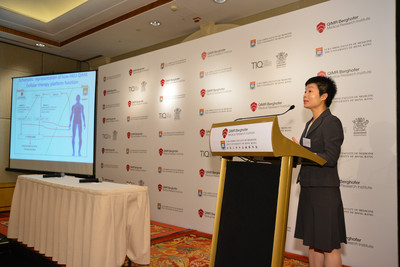 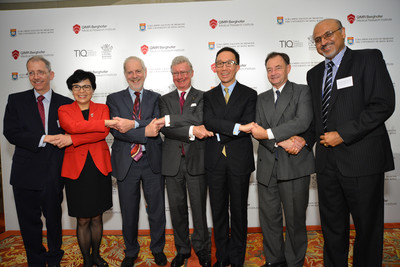