Ketamine is one of the most commonly abused psychotropic drugs in Hong Kong, especially among adolescent and young adult substance abusers. While long-term ketamine abuse is known to affect bladder function, its effect on the biliary system and liver function has not been well-investigated. The research team of Department of Medicine, Li Ka Shing Faculty of Medicine, The University of Hong Kong (HKU), and Department of Surgery, North District Hospital (NDH), performed magnetic resonance imaging (MRI) for ketamine abusers and demonstrated ketamine also damages the biliary system. This damage may be reversible after stopping ketamine abuse.

Ketamine abuse and its harmful effects

According to the Central Registry of Drug Abuse of the Narcotics Division, The Government of the Hong Kong SAR, in 2015, the average age of reported drug abusers in Hong Kong was 38 years, of which 19.0% took more than one drug. 77% started substance abuse before the age of 21 years. Ketamine was the most commonly abused psychotropic drug in Hong Kong from 2006 to 2014, and the second most common in 2015. 23.1% of reported drug abusers used ketamine, with the proportion increasing to 39.0% in individuals younger than 21 years of age. Ketamine abuse is also common in East and South-East Asia.

The research team from HKU and NDH recruited ketamine abusers from the community via a network of non-government charitable organizations that offer assistance to drug abusers in Hong Kong, which include Barnabas Charitable Service Association Limited, Hong Kong Lutheran Social Service and Tung Wah Group of Hospitals CROSS Centre. Study participants are invited for clinical assessment, blood tests and a magnetic resonance imaging (MRI) of the biliary system. MRI findings were interpreted by two radiologists blinded to the clinical profiles of study participants. A subset of participants, including individuals who had subsequently quitted ketamine abuse, were invited for a second clinical assessment and MRI scan.

The research team recruited 257 ketamine abusers, of an average age of 28.7 years, and had been abusing ketamine for an average duration of 10.5 years. 72.4% and 45.9% had a history of emergency attendance for abdominal pain and urination problems respectively. 60.3% had elevation of serum ALP, a liver enzyme that reflects biliary tract damage.

Biliary tract damage was reversible in 6 participants who had a second MRI scan after quitting ketamine abuse. These 6 participants also had improvement in abdominal symptoms and normalization of liver enzymes. At the same time, one participant with a longstanding history of ketamine abuse found to have advanced liver cirrhosis, which was likely a result of the continued damage to the biliary system.

Significance of the study and suggestions

The reversibility of biliary tract damage after quitting ketamine and the development of liver cirrhosis after longstanding exposure are important public health messages. These should be emphasized in educational efforts when combating against substance abuse.

“The study enhances our understanding of the toxic effects of ketamine on the biliary system and the liver. Hopefully our study findings will motivate current drug abusers to quit, and will encourage our community’s efforts in ‘saying no’ to drug abuse,” says Dr. Walter Seto Wai-kay, Clinical Associate Professor of Gastroenterology and Hepatology of Department of Medicine, Li Ka Shing Faculty of Medicine, HKU.

This study was funded by the Beat Drug Fund, Narcotics Division, The Government of the Hong Kong SAR. 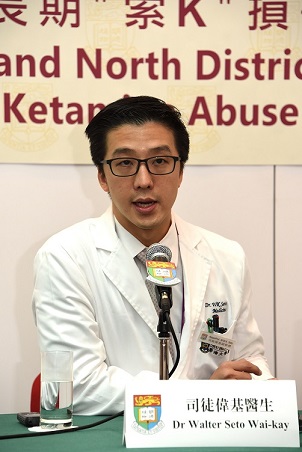 Dr Walter Seto Wai-kay, Clinical Associate Professor of Department of Medicine, Li Ka Shing Faculty of Medicine, HKU said that the study enhances our understanding of the toxic effects of ketamine on the biliary system and the liver. 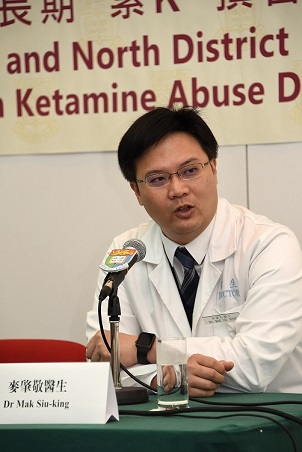 Dr Mak Siu-king, Associate Consultant of Department of Surgery, NDH, hopes that the study findings will motivate current drug abusers to quit, and will encourage our community’s efforts in “saying no” to drug abuse.