The World Health Organization has declared antimicrobial resistance one of the biggest threats to global health. Now, HKU scientists and their collaborators have discovered a compound that is a serious contender in the battle to tackle this serious problem. Their findings are published this week in the Proceedings of the National Academy of Sciences of the United States of America (link to the publication).

New work be the HKU Li Ka Shing Faculty of Medicine and the University of British Columbia (UBC) is offering a lead in that battle with the discovery of a lead compound that simultaneously suppresses the production of multiple virulence factors in MRSA and CA-MRSA. This follows a widely-recognized discovery in 2017 by Dr Richard Kao Yi-tsun from the Department of Microbiology, Faculty of Medicine, HKU and Professor Julian Davies from UBC of a lead compound that reduces the virulence of S. aureus by inhibiting the production of the golden pigment of the bacteria, and an explorative research project to look for new strategies to combat antimicrobial resistance that was initiated in 2009 by Professor Yuen Kwok-yung and funded by RFCID/HMRF grants from the HKSAR government.  The newest discovery gives hope that it may be possible in the near future to use non-antibiotic drugs to treat bacterial infections, without the fear of instigating AMR.

A total of 50,240 structurally diverse small molecule compounds were screened to identify compounds that reduce the virulence of MRSA. One compound, which the team named M21, was found to be effective at suppressing the virulence factors production in S. aureus. The finding emerged from a combination of mutational studies, enzymatic assays and molecular modeling. The efficacy of M21 in reducing MRSA virulence was further validated in in vitro cell-based tests and in vivo animal studies.

A whole array of virulence factors contributes to the pathogenesis of S. aureus, especially CA-MRSA. While it is difficult to totally abolish MRSA virulence, given that many factors and regulators contribute to its virulence, there is promising therapeutic potential in seeking to simultaneously suppress multiple virulence genes. The team behind this study has shown that the non-antibiotic lead compound, M21, can effectively suppress the production of multiple virulence factors in CA-MRSA and MRSA. The molecular target M21 has been identified to be a ClpP, a major virulence regulator in S. aureus. Deletion of the clpP gene in S. aureus does not have much affect effect on the growth of the bacteria, but it greatly reduces the virulence of the bacteria. This work has confirmed the importance of ClpP in controlling the virulence properties of S. aureus. The results were further demonstrated in tests that found experimental animals treated with M21 were protected from a virulent strain of CA-MRSA and survived the infection. The finding paves the way for the development of anti-virulence drugs against S. aureus, including multidrug resistant MRSA and highly-virulent, CA-MRSA.

The research also represents a conceptual breakthrough because it uses small molecular compounds to simultaneously suppress multiple virulence gene expressions in MRSA, so as to keep S. aureus in an avirulent state. The work evolves the first generation “anti-virulence” idea of inhibiting just one major virulence factor, into a holistic concept of suppressing multiple virulence factors at the gene expression level. This ground-breaking discovery is published in the top international scientific journal Proceedings of the National Academy of Sciences of the United States of America on July 16, 2018. The paper’s authors include Dr Gao Peng, Dr Ho Pak-leung, Dr Yan Bing-peng, Dr Sze Kong-hung, Professor Julian Davies and Dr Richard Kao Yi-tsun. 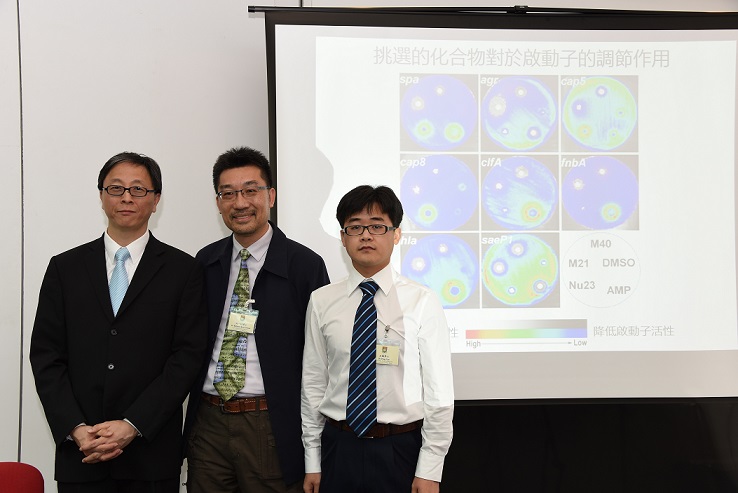 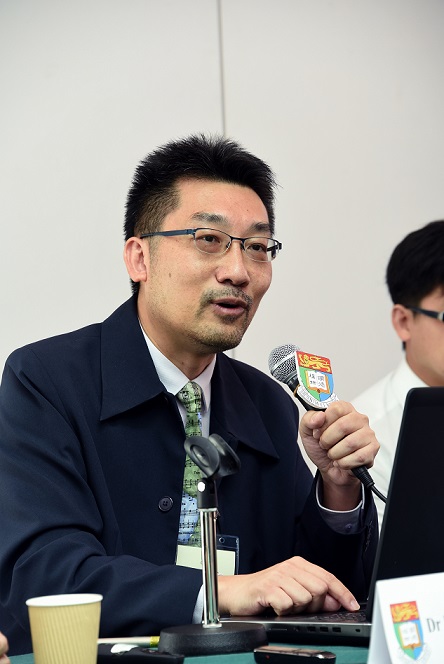 Dr Kao presented that the newest discovery gives hope that it may be possible in the near future to use non-antibiotic drugs to treat bacterial infections, without the fear of instigating AMR.