The Eye Institute of The University of Hong Kong (HKU) Li Ka Shing Faulty of Medicine performed the first implantation of subretinal microchip in Asia to a Chinese patient who was visually impaired due to degenerative condition retinitis pigmentosa (RP). The early result of the surgery is highly satisfactory and the patient has gained sight, including seeing light and dark and being able to read letters projected on a screen. The microchip was developed by Retina Implant AG (“Retina Implant”), a leading developer of subretinal implants for the visually impaired. Subsequent to the first and second phases of clinical trials conducted in Germany, the operation performed by HKU team is the first successful case outside Germany to apply the new technology on a patient, kicking off the phase 3 international trial of this subretinal implants.

The HKU Eye Institute is partnering with Retina Implant to be the leading clinical trial site in Asia to test the latest developed microchip in patients who have been blind from the degenerative condition RP. This collaboration expands Retina Implant’s multi-centre study to Asia which apart from the leading sites in Europe and the United States. The Hong Kong study site is being led by Professor David Wong Sai-hung, Albert Bing Ching Young Professorship in Ophthalmology, Chair Professor and Director of the Eye Institute, The University of Hong Kong Li Ka Shing Faculty of Medicine. Professor David Wong is a seasoned clinical researcher and has led several randomised trials in the related areas of retinal detachment and age-related macular degeneration.

“I have always believed that subretinal chip implant offers the best chance of success in our quest for artificial vision,” says Professor David Wong Sai-hung, “After months of careful preparation, we are very excited to carry out the first implantation in a Chinese patient, marking the first such procedure outside of Germany. The whole team is delighted with how smoothly the surgery went and we are particularly excited by the amazing early results, which prove that patients of this previously incurable condition can in fact regain at least some sight.”

The patient, Mrs Tsang Wu Suet-yun, has been legally blind for 15 years. She experienced a sharp visional deterioration a few years before losing her eyesight. Prior to the surgery, she was able to see almost no light at all. Despite this, she had adapted to her condition and continued to live a very productive and capable life. She works as a masseuse and at home, prepares dinner for the family every day – in almost total darkness. Following the procedure in which she received Retina Implant’s microchip, she can see light and dark. In the laboratory, she was even able to read letters projected on a screen.

Professor David Wong Sai-hung says, “Having been blind for so long, Mrs Tsang has to learn to see once again. It is like a baby learning to walk.” The patient has to practise hand-eye coordination and learn to control her eye movement in order to fix her sight at appropriate targets. “In Hong Kong, there are probably over 2,000 patients with retinitis pigmentosa. We wish to thank the patient support group Retina Hong Kong that helped us identifying those patients that might be suitable for this treatment.”

About the subretinal implantation

The subretinal microchip implantation involves placing a 1500-electrode microchip just below the retina, specifically in the macular region. Results of Retina Implant’s first human clinical trial were published in the prestigious peer-reviewed journal Proceedings of the Royal Society B and showed placement of the implant below the retina, in the macular region, provided optimum visual results allowing patients to recognize foreign objects and to read letters to form words.

Post-implantation, the microchip is turned on – this is when the evaluation of sight restoration begins. As patients must develop new internal processes for interpreting the images they see, it typically takes several weeks to fully realise their new sight capabilities.

“My eye sight has been lost for 15 years because of retinitis pigmentosa. Although I am used to living in darkness, I still hope I can see again one day,” says Mrs Tsang Wu Suet-yun. “I am so fortunate to be chosen as the first Chinese patient to receive this surgery, and I am very grateful for the results I have achieved so far. After several weeks of training, I can already see light and object outlines. And I am able to make more sense of the environment around me. It is truly encouraging for my family and of course for me as well!"

“The University of Hong Kong Eye Institute is a hub of innovation when it comes to ophthalmic research, making it the ideal partner as we expand our research globally into Asia,” says Dr. Walter-G Wrobel, CEO, Retina Implant AG. “We congratulate Professor Wong and his team on a terrific start in the journey to bring a new solution to the hundreds of thousands of patients suffering from retinitis pigmentosa in China and around the world.” adds Mr. Reinhard Rubow, Executive Vice President & CFO, Retina Implant AG.

Learning from the experience of the first implantation, Professor David Wong and his team find there are many research questions waiting to be answered. Professor David Wong says, “So far, we know that the retinal chip can be safely put inside an eye. The surgery is challenging and can take many hours to perform. We already know that for the chip to work best, it has to be precisely placed underneath the macula. What we do not know is which type of patients would benefit the most from the surgery. There are many forms of RP. Many are familial. We do not know whether the duration of blindness makes any difference to the prognosis. To be totally convinced of the effectiveness of the surgery, we are selecting patients who are totally blind. We prefer to operate on patients who have no light perception or those patients who cannot utilize what light they see for navigational purposes.”

“This necessary means that patients have had very poor vision for a prolonged period. Literally, they might have “forgotten” how to see. We do not know much about physiological and neurological changes in the brain in response to prolonged blindness. What we know even less is what happens when some sight is restored. New nerve connections might need to be established. Hand eye coordination may need to be re-learned. We are fortunate in having two really highly motivated Chinese patients. We will observe them with great interest in the coming months,” Professor David Wong adds.

About the HKU team

The first subretinal microchip implantation in Asia was a collective success contributed by experts from The University of Hong Kong Li Ka Shing Faculty of Medicine and the Faulty of Dentistry. The eye surgery was led by Professor David Wong Sai-hung, head of HKU Eye Institute assisted by his Assistant Professor Dr Ian Wong Yat-hin and Professor Florian Gekelar from Tubengen University. Professor Nabil Samman and Dr Winnie Choi Wing-shan from the HKU Faculty of Dentistry formed the head and neck team that implanted the sensor behind the ear and under the scalp. Dr Gordon Wong Tin-chun, Associate Professor in the HKU Department of Anaesthesiology ensured the prolonged surgery was safely carried out under general anesthetics. The pre-operation psychological assessment was advised by Professor Sham Pak-chung of HKU Department of Psychiatry. 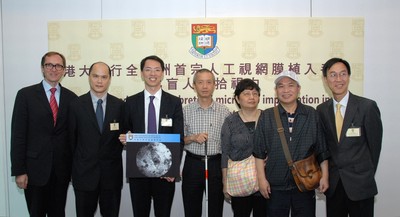 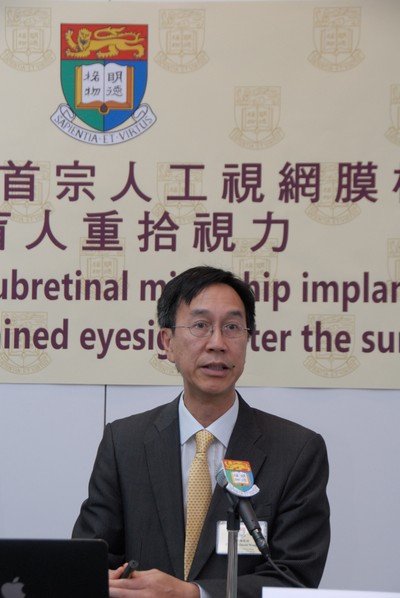 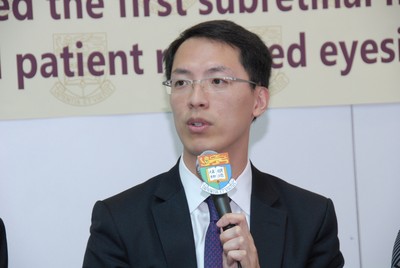 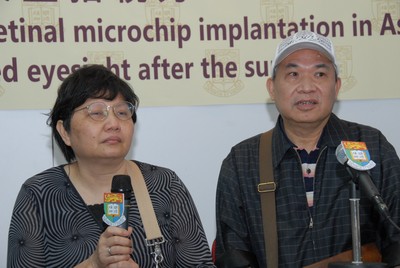 Mrs Tsang went blind for years due to degenerative condition retinitis pigmentosa and has now regained sight in her right eye after the subretinal microchip implantation in February this year. 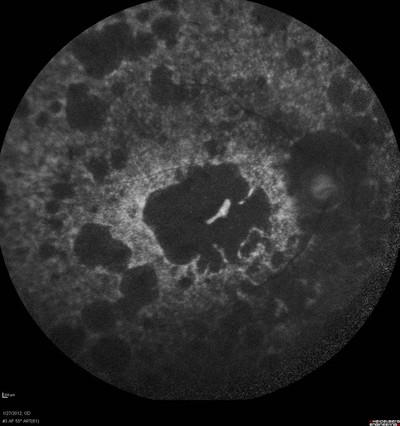 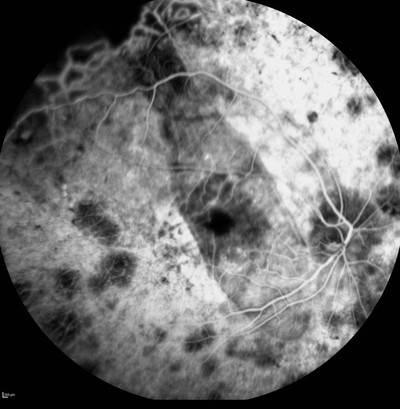 Fundus of patient shows that the subretinal microchip was implanted specifically in the macular region, achieving best outcomes 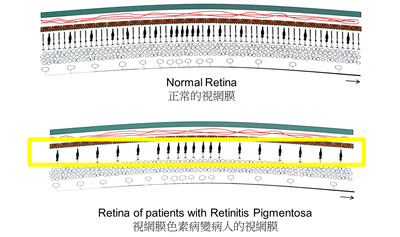