A new approach to deriving stem cells that was led and developed by scholars from LKS Faculty of Medicine of The University of Hong Kong (HKUMed), in collaboration with scientists from the Wellcome Sanger Institute in Cambridge, UK and the Friedrich-Loeffler-Institut in Germany, offers groundbreaking potential for studying embryonic development and producing translational research in genomics and regenerative medicine, biotechnology and agriculture. The findings were published in Nature Cell Biology.

The Expanded Potential Stem Cells (EPSCs) of both porcine (pig) and human have been established. The porcine EPSCs are particularly important because this is the first time scientists have been able to derive stem cells from early pig embryos. Domestic pigs have great potential for biomedical research because of their similarity to human genetics, anatomy and physiology (such as organ size). Being able to genetically-modify pig stem cells will also be beneficial for animal health and food production. Human EPSCs are expected to provide a new cell source for studying human development and regenerative medicine.

Professor Pengtao Liu of the School of Biomedical Sciences and Stem Cell and Regenerative Medicine Consortium, HKUMed, who leads the research, said: “Scientists have been attempting to derive porcine embryonic stem cells for decades without much success. With our EPSC technology, we have now successfully derived and characterised stem cells from porcine preimplantation embryos. We have also established similar human stem cells. Our study represents a major advance in stem cell research.”

The key characteristic of EPSCs is that they are derived from pre-implantation embryos of very early developmental stages. Until now, embryonic stem cells in general are established from pre-implantation embryos made up of at least dozens of cells that are called blastocysts. In the embryos earlier than the blastocysts stage, cells are less differentiated and have potential to develop into more kinds of cells. EPSCs have the potential to produce all types of cell and thus have totipotency features.

Professor Liu’s group has so far established EPSCs from mouse, pig and human. These new stem cells across species are molecularly similar and amenable to multiple rounds of genome-editing. Besides their capacity to produce all types of cell found in our body and are useful for studying human disease and regenerative medicine, human EPSCs can produce large numbers of placenta cells, called trophoblasts, which offer new opportunities to investigate pregnancy complications such as pre-eclampsia and miscarriages.

“These EPSC stem cells possess developmental potency that is not generally seen in conventional or standard embryonic or induced pluripotent stem cells. They have the potential to produce all embryonic and extra-embryonic cell lines – including those in the placenta and yolk sac, turning back the development clock to the very earliest cell type. These cells will enable researchers to study early embryonic development, miscarriage and developmental disorders,” said Dr Xuefui Gao, who was the first author of the Nature Cell Biology paper.

Professor Liu provided the inspiration for this approach after noticing the difficulties scientists faced in developing stem cell lines for mammals beyond some rodents and primates. The practice of using blastocysts for deriving stem cells dates back to the 1970s and 1980s when the first study to derive stem cells was carried out and the technology and understanding of molecular events were much more limited than today. Blastocysts have been the norm ever since, but the HKU scientists thought that earlier intervention might offer a greater chance of success.

“The earlier embryonic developmental stages that we get embryonic stem cells, the less diversity there might be among mammalian species, the higher chance that the EPSC technology works for more mammalian species. Our idea was to try to investigate conditions that could allow us to capture and derive stem cells from the very early embryos of different species – when they are like a blank sheet of paper – and remarkably it works,” said Professor Pengtao Liu.

The first breakthrough from Professor Liu’s research group came with mice in 2017, when key molecular pathways that drive cell lineage differentiation were targeted. The most recent study on human and porcine EPSCs suggests that this approach might be possible with mammals that hitherto had been elusive to stem cell researchers.

Building on this work, the HKUMed researchers are continuing to push the EPSC technology and are collaborating with other research groups. “We are excited that these new stem cells are expected to have broad applications in basic and translational research in the near future,” said Professor Pengtao Liu.

The research was led and conducted by Professor Pengtao Liu’s laboratory at HKUMed, in collaboration with Professor William Yeung of the Department of Obstetrics and Gynaecology, HKUMed; together with Professor Heiner Niemann, Director Emeritus of Friedrich-Loeffler-Institut (FLI) and Dr. Monika Nowak-Imialek of FLI; Professor Sarah Teichmann and Dr Xi Chen of the Wellcome Sanger Institute in Cambridge, UK; Professor Asif Ahmed of Aston University, UK; and several collaborating research laboratories in Mainland China. This study was supported by HKUMed and HKU internal funding and by the Wellcome Sanger Institute. 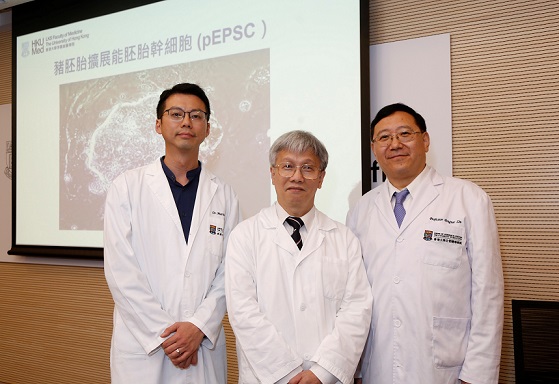 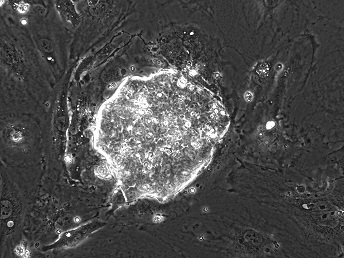