A research team at the LKS Faculty of Medicine, The University of Hong Kong (HKUMed), has discovered the potentials of a SECISBP2 protein in adipose tissue macrophages (ATMs) as a therapeutic biomarker in the treatment of chronic diseases such as type 2 diabetes, hyperlipidemia, cardiovascular diseases and cancers caused by obesity-induced insulin resistance. The findings, signaling a breakthrough for a new direction towards treating these diseases, were published in Science Advances (link to the publication) , a top-tier and internationally recognised academic journal. The research team was led by Dr Feng Yibin, Associate Director of the School of Chinese Medicine, HKUMed.

Obesity is one of the world’s most pressing public health issues. Obesity-induced insulin resistance could contribute to some chronic non-communicable diseases such as type 2 diabetes, hyperlipidemia, cardiovascular diseases and different types of cancer.

Development of localised and systematic insulin resistance during obesity is linked to inflammation of adipose tissue. Previous observation has suggested that a binding protein, called SECIS Binding Protein 2 (SECISBP2), was down-regulated in the fatty tissue of patients with obesity-induced diabetes, but the role and mechanism of the protein in the pathogenesis of obesity and type 2 diabetes was unclear.

During development of insulin of resistance, anti-inflammatory ATMs in lean adipose tissue switch towards pro-inflammatory phenotypes in obese adipose tissue, leading to secondary macrophage infiltration and formation of an inflammatory microenvironment. The transformation and infiltration of ATM phenotypes induces insulin resistance through various mechanisms. Targeting ATMs maybe one of the new strategy to treat diabetes and obesity. Also the research group will identify effective targeted molecules from traditional and modern herbal formulas for the treatment of related diseases.

In the pilot study, conducted with 20 obese patients with diabetes, researchers found that the expression of SECISBP2 was suppressed in ATMs in the trial group. The pilot study also observed that TNTL (Tangningtongluo), a herbal product derived from a traditional medicine used by China’s Miao people, could remarkably reduce blood glucose levels and improve hemoglobin 1Ac, indicating the potential for an in-depth follow-on study.

The researchers found that the loss of SECISBP2 induced pro-inflammatory leukocyte infiltration and adipocyte lipogenesis in fatty tissues. Specifically, the loss of SECISBP2 in ATMs induced by saturated fatty acid-induced metabolic activation of ATMs, results in its local proliferation as well as infiltration of pro-inflammatory ATMs. Mechanistically, SECISBP2 was associated with the expression of several endogenous antioxidant proteins, which safeguarded ATMs from ROS as well as inflammasome activation. The loss of SECISBP2 increased intracellular ROS, and activated inflammasomes to process the maturation of IL1β. Thus, a SECISBP2 deficiency in ATMs accelerated obesity-induced insulin resistance, while in separate research involving obese mice, re-expression of SECISBP2 attenuated insulin resistance in the mice.

The study conducted by Dr Feng Yibin’s team found that, during initiation and progression of insulin resistance, SECISBP2 was gradually down-regulated in adipose tissue, and was inversely correlated with the infiltration of ATMs. SECISBP2 was majorly expressed in the anti-inflammatory phenotype ATMs, and was suppressed in the phenotypes’ switch towards pro-inflammatory ATMs during obesity, which could be related to the accumulation of fatty acid.

Specific knockdown of SECISBP2 in the ATMs significantly accelerated high-fat diet-induced obesity and insulin resistance in mice, while re-expression of this protein in insulin resistance mice appears to improve blood glucose levels.

Lastly, a holistic formula TNTL, used to target SECISBP2 in ATMs, was shown to reverse obesity-induced insulin resistance in an experimental murine model and resulted in improved hyperglycemia in diabetic patients.

The results suggested that SECISBP2 expression maintains the anti-inflammatory property of ATMs, which could be associated with their inhibitory effect on intracellular oxidative stress and inflammasome activation. SECISBP2 deficiency during the obesity-induced phenotype switch from anti-inflammatory to pro-inflammatory ATMs, leading to secretion of pro-inflammatory cytokines such as IL1β, which led to adipose tissue inflammation and initiated localised and systemic insulin resistance. TNTL could specifically elevated SECISBP2 expression in ATMs, thereby improving insulin resistance.

According to Dr Feng Yibin, the study identifies SECISBP2 as a critical factor involved in the translation and synthesis of anti-oxidative selenoproteins. While the study does not focus on offering sound scientific evidence for the use of selenium supplements to improve the insulin resistance during obesity, it suggests that TNTL as a Miao medicine has its unique and irreplaceable characteristics.

This study, through identifying new mechanisms of action and targets from a clinically effective Chinese medicine formula, could offer a new strategy of research in Chinese medicine. Findings from this study also suggested a leptin/leptin receptor-independent effect of TNTL, which is different from the action mechanisms of current anti-diabetic treatments.

The research team hopes to continue to investigate the role of SECISBP2 in the pathogenesis and treatment of other insulin resistance-related metabolic disorders such as diabetes, hepatic diseases and cancers, and identification of effective targeted molecules from traditional and modern herbal formulas for the treatment of related diseases.

The research was conducted by a group led by Dr Feng Yibin, Associate Director of the School of Chinese Medicine, HKUMed. Dr Feng’s team has focused for years on the use of Chinese medicine in the prevention and treatment of metabolic diseases and cancers. Other research members of this study include: Dr Ning Wang (Assistant Professor, the first author), Dr Hor-Yue Tan, Dr Sha Li (both are post-doctorate fellows), Ms Yu Xu, Mr Cheng Zhang (both are PhD students). In addition to Dr Feng’s team, Professor Wang Di of Jilin University, Mr. Xia Wen from the Joint Research Center for National and Local Miao Drug, and Professor Che Ming-Chi from Department of Chemistry, HKU, contributed partially to this study’s animal model evaluation, TNTL quality control and chemical composition, respectively. 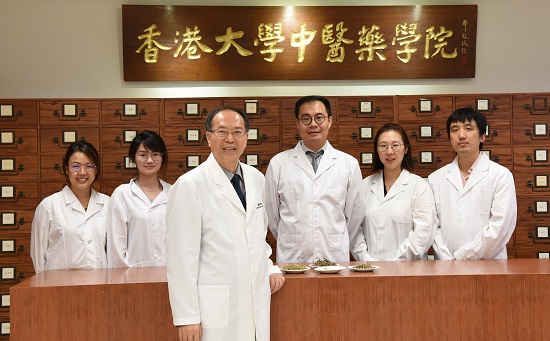