Stroke is the number 4 cause of death in Hong Kong. There are around 25% of stroke cases caused by atrial fibrillation (AF). According to the research findings by the Li Ka Shing Faculty of Medicine, The University of Hong Kong (HKU) and the National Yang-Ming University in Taiwan, Chinese AF patients might have a higher risk of ischemic stroke as well as higher risk of intracranial hemorrhage compared with the Western World. Besides, patients with AF have a 5-fold higher risk of stroke than ordinary people. To enforce the management of stroke prevention in patients with AF, Department of Medicine of HKU initiates two new measures recently, namely, the AF management app and private doctors AF screening programme.

Dr David Siu Chung-wah, Clinical Associate Professor of the Department of Medicine, HKU, who leads the new programmes, said “Although the risk of stroke is higher in AF patients, if they can be identified at the early stage and proper treatment with medicine is given to them, it is believed that 2 out 3 AF related strokes, i.e., 2,000 strokes can be prevented each year. We have done many researches over the years and hope to implement the findings to “real-life” clinical practice. By launching different programmes, we hope to fight stroke and reduce the major burden to the patient, their family, medical system, and the society caused by stroke.

Dr Chan Pak-hei, Clinical Assistant Professor of Department of Medicine, HKU said “The app is user-friendly, take the stroke risk calculator as example, doctors only need to enter details of risk factors, such as age, high blood pressure, diabetes, cardiac failure etc., the app can automatically calculate the risk of stroke each year. The app not only provides doctors with useful information but also allows patients to understand more about their health situation. This enables doctors to effectively communicate with the patients their absolute risk of stroke, balancing that with the major bleeding risk, thereby making a rational decision for long-term anticoagulation with the patients.”

The app is launched by Li Ka Shing Faculty of Medicine, HKU and HEARTISAN this March and supports mobile devices with iOS or Android system.

Patients with atrial fibrillation, particularly elderly, are often asymptomatic. Up to 25% of patients with AF-related stroke had AF first diagnosed at the time of stroke, thus missing the prime time for treatment. Early identification of patients at high risk of AF would enable more aggressive primary prevention and targeted intervention. In 2014, the team has in collaboration with the Department of Family Medicine and Primary Care in Hong Kong East Cluster, Hospital Authority launched a massive AF screening program in government outpatient clinic in Hong Kong East Cluster aiming to screen 60,000 patients at high-risk of AF. To date, nearly 15,000 people received the screening and follow-up works have been in good progress. In order to broaden the coverage to fight stroke in Hong Kong, the team is going to extend the AF screening program in private sector.

The team will in phase road-show 18 regions in Hong Kong providing certificate course for up-to-date AF management to private doctors. At the same time, the team is going to recruit 1,000 private doctors to perform AF screening. The programme, which is a research project of HKU last for 2 years (from June 2015 to May 2017), aims to broaden the network of AF screening in order to identify patients with asymptomatic AF and to provide them essential investigation and prompt stroke prevention therapy. HKU will provide equipment, technological (including electrocardiogram and echocardiography) and professional support to participating doctors. The ultimate goal is to reach 100-150 thousands of high-risk patients and provide them with proper treatments.

About Stroke and AF

AF is commonly known as consistently irregular heartbeat and it affects about 1% of adult population. Patients with AF have a 5-fold higher risk of stroke than ordinary people. In Hong Kong, there are 12,000 new cases of stroke each year. That means, on average, a stroke occurs every 44 minutes. Stroke kills more than 3,200 people a year, about 1 of every 13 deaths. Amongst these strokes, 20-25% are related to atrial fibrillation, i.e., 3,000 strokes each year. Many patients with new stroke have previously diagnosed atrial fibrillation but on suboptimal medication to prevent stroke. Even worse, atrial fibrillation is often diagnosed only at the time when new stroke occurs, thus precluding any meaningful preventive measure. 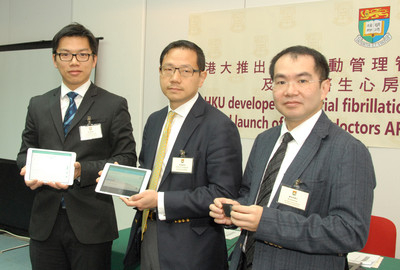 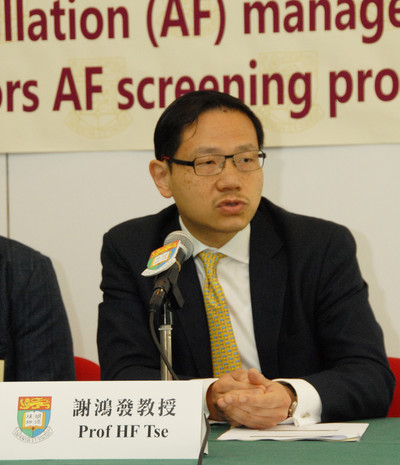 Professor Tse Hung-fat, William M W Mong Professor in Cardiology and Chair Professor of Department of Medicine, Li Ka Shing Faculty of Medicine, HKU said “The AF management app can provide data for doctors on assessing the efficacy of anticoagulation for warfarin users. If the treatment is not ideal, doctors can further discuss with patients to use other medication.” 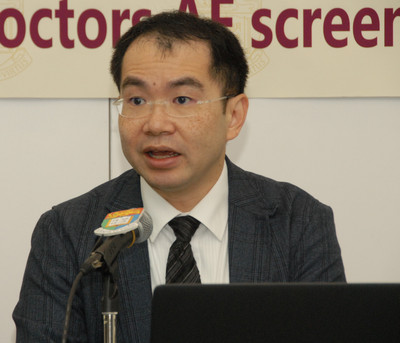 Dr David Siu Chung-wah, Clinical Associate Professor of the Department of Medicine, Li Ka Shing Faculty of Medicine, HKU said “We hope to join hands with private doctors to fight against AF by broadening the network of AF screening, so that patients with asymptomatic AF can be identified in the earlier stage and suitable treatment can be offered, thus, reducing the risk of stroke.” 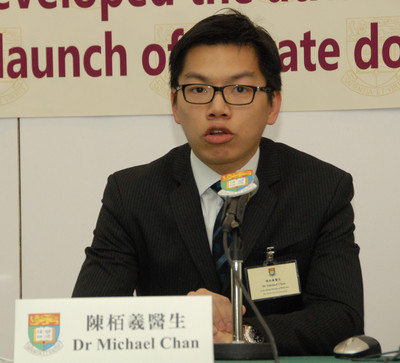 Dr Chan Pak-hei, Clinical Assistant Professor of Department of Medicine, Li Ka Shing Faculty of Medicine, HKU said “The app is user-friendly, take the stroke risk calculator as example, doctors only need to enter details of risk factors, such as age, high blood pressure, diabetes, cardiac failure etc., the app can automatically calculate the risk of stroke each year, which can provide a quick reference to doctors and AF patients to assess current health condition.”