The University of Hong Kong Li Ka Shing Faculty of Medicine and Queen Mary Hospital have partnered with the National Cancer Institute of the United States to conduct a clinical study on liver cancer patients treated with thermosensitive liposomal-encapsulated doxorubicin combined with radiofrequency ablation (RFA) recently. Twenty four liver cancer patients (primary, n=9; secondary, n=15) have been treated with this novel technology of chemotherapy globally. Thermosensitive liposomal-encapsulated doxorubicin can be safely administered systemically in combination with RFA. The toxicity was limited and manageable.

Thermosensitive liposome-encapsulated chemotherapy is a recently developed novel technology in which chemotherapy drug is encapsulated in a layer of heat-sensitive liposome which dissolves at a temperature greater than 42ºC and release the drug. This allows delivery of the drug at high dose locally to a tumor heated but minimize expose of other organs to the drug. This is a “smart target” drug delivery mechanism that allows more effective chemotherapy at the tumor but reduce the systemic toxicity of the chemotherapy.

In conjunction with the National Cancer Institute of the United States, the Department of Surgery of Queen Mary Hospital performed the first-ever human study on the use of heat activated chemotherapy in cancer patients. Twenty four patients from the two institutions with primary or secondary liver cancers were treated with radiofrequency ablation in combination with thermosensitive liposomal doxorubicin in a phase 1 trial. Radiofrequency ablation is a thermal ablation technique aimed to kill cancer cells with heat but incomplete eradication of cancer cells in the peripheral zone and tumor recurrence remain a major problem. By combination with thermosensitive liposomal doxorubicin, high concentration of doxorubicin, a chemotherapy drug commonly used for liver cancer, can be delivered to the tumor to kill cancer cells not subjected to lethal temperature.

The study showed that this new technology of heat activated chemotherapy is effective in enhancing ablation of the tumor and is well-tolerated even in cirrhotic patients without any major life-threatening toxicity, which is common when conventional chemotherapy is used to treat liver cancer patients. A large scale international phase 3 trial involving 70 sites in Hong Kong, Mainland China, Taiwan, Korea, Japan, Thailand, Malaysia, Philippines, USA, Canada and Italy is on-going, aiming to recruit totally 600 patients. Queen Mary Hospital serves as the principal investigator of the trial in Asia-Pacific region leading 57 sites in participating in the study. The technology is also undergoing phase 1/2 trial in breast cancer and has the potential in treating other cancer types. 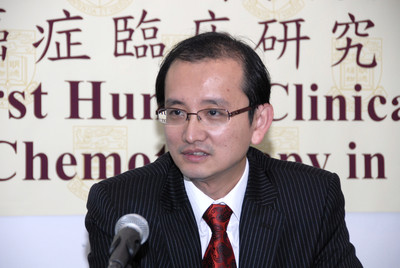