Over 300 million people worldwide have depression, according to the World Health Organization (WHO).  In Hong Kong, a study (2014) by The University of Hong Kong (HKU) estimated the number of depressive patients to be 780,000, 10.7% of the total population. The results of the Hong Kong Mental Morbidity Survey (2015) revealed a local prevalence of 980,000 (13.3%) people suffering from depression and anxiety disorders.

In view of the growing number of common mental disorders, WHO has promoted the management of depression and anxiety disorders by primary care doctors since 2005, with the goal to lessen the burden of psychiatrists and ensure early intervention for patients.  In Hong Kong, there are currently 380 specialist psychiatrists serving seven million people, the waiting time for new cases to consult public psychiatrists is incredibly long (for example, up to 127 weeks in New Territories East Cluster, 2018), while not all patients can afford the consultation fee for private psychiatrists.  In addition to the worry about social stigma, it is not surprising that many would prefer delaying or giving up treatment for their psychological distress.

In practice, consultations for psychosomatic symptoms, such as headache, dizziness, stomachache, sleeplessness and heart racing, are common among primary care attenders.  Studies found that over 25% of primary care consultations had a significant psychological component.  It is clear that primary care doctors share an important role in caring for common mental health problems.

A research on psychological distress and help seeking was conducted by the Department of Family Medicine and Primary Care, The University of Hong Kong in 2016.  A total of 1,626 adult primary care attenders recruited from 13 private clinics and 6 public clinics over 10 districts of Hong Kong completed a structured questionnaire.  650 (40%) respondents reported that they had ever experienced psychological distress (anxiety and/or depressive symptoms). Patients with a regular primary care doctor had nearly a double chance to be treated for their psychological distress compared to those without a regular doctor (22.1% vs. 13.4%). Moreover, for respondents with a regular primary care doctor, their chance of being asked by the doctor about their psychological problems, or they actively told their doctors about the problems was higher than those without a regular doctor (Table 1).

Over 90% of the respondents agreed that having trust in the doctor, and hoping to treat associated physical symptoms, such as headache, stomachache, sleeplessness and heart racing, were enablers that pushed them to seek help.  While doctors take initiative to ask about psychological distress (82.1%), easier accessibility to primary care doctors (79.5%), more affordable fees (78.5%), and less stigma (62.2%) were also enablers for the respondents.  On the contrary, without a regular primary care doctor makes it more difficult for the patient to have trust and be ready to seek help for their psychological distress.  Almost 65% of respondents shared the view that patients usually do not expect primary care doctors to manage psychological distress.  Our analysis shows the without regular primary care doctor group generally achieved less in terms of education level and household income, and consumed mainly public medical services.  Presently, about 65% of the Hong Kong population are having a regular family doctor; the ratio is much lower than the 80-90% of other developed countries like UK, Australia, Singapore, Canada and USA.  There is an urgent need for the government to promote the concept of regular family doctor and enhance the continuity of care at the primary care level.

The Need for Improving Continuity of Care in Hong Kong

A regular family doctor can render comprehensive and continuity of care for the patient, which helps foster trust in the patient-doctor relationship and facilitates the discussion of psychological issues that leads to early intervention.  Research shows that patients who have developed severe distress and marked social difficulties, because of delayed treatments, are less likely to improve.  In order to enhance treatment rates for depression and anxiety disorders, continuity of care by a regular doctor should be promoted in the public clinics.  Enhancing primary care services for mental health problems, as recommended by WHO, is no doubt the world trend.  The need for improving continuity of primary care for mental health problems in Hong Kong is imminent.

About the Research Team

This study was funded by the Health and Medical Research Fund, The Government of the Hong Kong SAR. 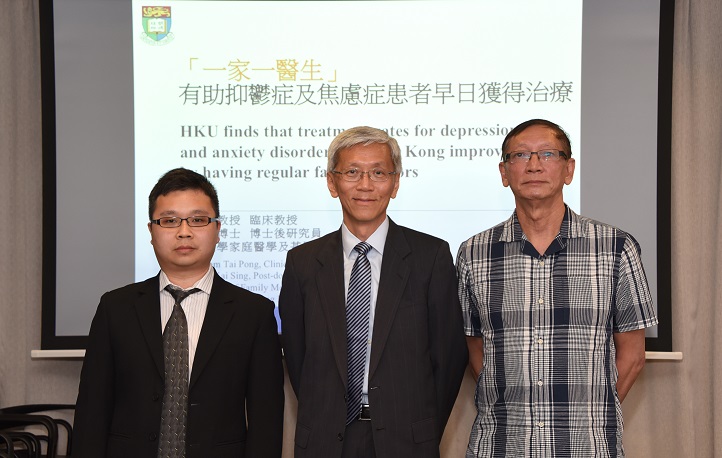 Professor Lam Tai-pong (middle) and Dr Tony Sun Kai-sing (left) promoted the management of depression and anxiety disorders by primary care doctors, with the goal to lessen the burden of psychiatrists and ensure early intervention for patients. Mr Lo (right), the patient, agrees that a regular family doctor can render comprehensive and continuity of care for the patient.