Hepatitis B virus infection is an important global health problem. According to the statistics of World Health Organization, more than 350 million people in the world are hepatitis B virus carriers. While it is known that hepatitis B virus carriers run 100 times of risk of developing liver cancer compared with non-carriers, the mechanism by which hepatitis B virus causes cancer in the liver remains unclear. The Department of Surgery of The University of Hong Kong Li Ka Shing Faculty of Medicine has recently conducted the world’s first genome-wide study of hepatitis B virus integration in liver cancer, which unveils recurrent integration sites in human genome and genetic mechanisms by which liver cancer is induced. The researchers observed that integration of hepatitis B virus genes into human genome is much more frequent in the tumors (86.4%) than in adjacent liver tissues (30.7%). Also, they identified a special region of the viral genome where it is cleaved and integrated into the human genome. Furthermore, three human genes were found to be the recurrent sites of viral integration. These groundbreaking findings may inspire future development of effective medication to prevent liver cancer. Results are recently published in Nature Genetics, the leading scientific journal on genetics.

One of the key researchers of this study, Professor Ronnie Poon Tung-ping, Suen Chi-sun Professor in Surgery and Chair of Hepatobiliary and Pancreatic Surgery, The University of Hong Kong Li Ka Shing Faculty of Medicine says, “Surgical resection is the best curative therapy for primary liver cancer, with a 5-year patient survival rate of approximately 55%. However, more than 50% of patients will develop new tumors in the rest of the liver after resection of the original tumor. Use of drugs to suppress hepatitis B virus replication may slightly reduce the recurrence rate but currently there is no effective therapy to prevent the development of such new tumors. Targeting the mechanisms identified in this study could lead to the development of novel therapeutic agents that interfere with hepatitis B virus integration into the host genome, thereby preventing cancer recurrence.”

The study found that integration of hepatitis B virus genes into human genome is observed much more frequently in the tumors (86.4%) than in adjacent liver tissues (30.7%).

Furthermore, the study identified a special region of the viral genome where it is most frequently cleaved and then integrated into the human genome. The comprehensive whole-genome sequencing in this large-sample cohort has provided an opportunity to investigate the frequency of recurring hepatitis B virus integrations in human genes in the cancer tissues. Three human genes are recurrently affected by hepatitis B virus integration in the liver cancer - TERT, MLL4 and CCNE1. Integration of the viral genes leads to formation of fusion genes with the three specific genes, resulting in increased expression of these three genes, which may in turn contribute to cell cycle dys-regulation and transformation of the normal cells into cancer cells.

Professor Poon suggests that future research should focus on the mechanisms of cleavage of hepatitis B virus at the special region, its integration into the three human gene sites and formation of fusion genes. He says, “Currently there are several drugs in clinical use that can inhibit replication of the virus and lower the hepatitis B virus DNA level in infected patients. However, these drugs are not adequate in prevention of liver cancer as they cannot completely eradicate the virus nor prevent its integration into human genome. I hope that development of specific drugs to inhibit viral integration may prevent the development of liver cancer in hepatitis B virus carriers.”

Besides, the higher frequency of hepatitis B virus integration observed in young liver cancer patients explains why some hepatitis B virus carriers may develop liver cancer at an early age of twenties or thirties without going through chronic hepatitis or cirrhosis. According to Professor Poon, of the 3500 primary liver cancer patients seen at Queen Mary Hospital from 2001-2010, 222 (6.3%) were below 40 years old. The survival of these young patients is much poorer compared with older patients (median survival 8.3 months vs 16.1 months) and this may be explained by the increased number of viral integrations as shown in this study.

The study was conducted by a team of investigators from the Department of Surgery of HKU including Professor Ronnie Poon, Professor Fan Sheung-tat (Sun Chieh Yeh Chair of Hepatobiliary Surgery) and Professor John Luk Moon-ching (Honorary Professor), in collaboration with National Singapore University which assisted in the experiments and data analysis. Funding support was provided by the Asian Cancer Research Group.

About hepatitis B virus and primary liver cancer

Primary liver cancer is one of the five most common cancers in the world, with close to one million new cases worldwide per year. It is one of the most aggressive cancers with higher mortality compared with other common human cancers. More than half of the liver cancer cases occur in China due to high prevalence of hepatitis B virus in the Chinese population. About 8% of the Hong Kong population are also carriers of hepatitis B virus, which is the main cause of liver cancer locally. 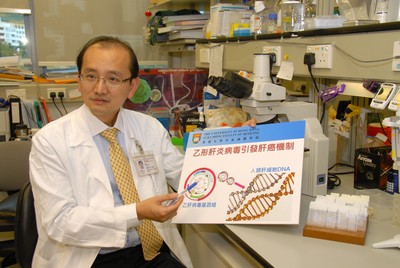 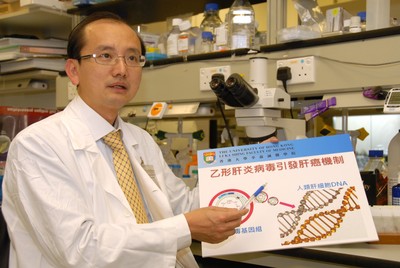