Hirschsprung (HSCR) disease (congenital megacolon) is a birth defect affecting the motility of the bowel. These babies suffer from severe constipation and intestinal obstruction because the nerve cells which co-ordinate bowel movements are absent. It is a global problem but is particularly prevalent in Asia, affecting 1 in 3,000 babies. Even though many of the patients share similar clinical symptoms, the underlying causes of the disease are complex and that would be the result of DNA changes disrupting different cellular pathways, accounting for the diverse treatment outcomes.

The Li Ka Shing Faculty of Medicine of The University of Hong Kong (HKU) has conducted a whole genome sequencing study to decode the DNA changes in the entire genomes of HSCR patients. The study revealed that disease risk is determined by different constellations of multiple DNA changes.  Importantly, using a human stem cell-based disease model, the team further demonstrated that genes implicated in Alzheimer’s disease pathway are dysregulated in a subgroup of HSCR patients, suggesting these two diseases may share some common pathological mechanisms and druggable targets. The research has just been published in Gastroenterology, the top journal in the field of Gastroenterology.

Babies born with HSCR disease will die unless the portion of the bowel with no nerve cells is surgically removed. In Hong Kong, over 120 affected babies have been operated in the last ten years.  Nevertheless, the functional outcome of surgery is variable and a significant number of patients still suffer from life-long complications, ranging from intractable constipation, incontinence, enterocolitis to devastating short bowel syndrome, leading to not only tremendous psychosocial impact on the patients, but also a heavy financial burden to the health care system.

HSCR disease is attributed to a failure in formation of nerve cells in the intestine. During development, neural stem cells in the bowel (enteric neural crest cells, ENCCs) need to migrate a long way to fully colonise the entire bowel. ENCCs also undergo differentiation to give rise to a wide-range of nerve cells, which subsequently form a neural network to control the bowel movement. The migration and differentiation of ENCCs have to be precisely regulated, in order to establish a functional network for the bowel. DNA changes in the genes implicated in these two processes may disturb the formation of functional neural network, leading to HSCR disease.

The team has conducted the first ever whole-genome sequencing analyses of HSCR patients recruited from hospitals in Hong Kong, mainland China and Vietnam. For the study, the whole genome sequences of 443 HSCR patients and 493 ethnically matched individuals without HSCR disease (controls) were generated. By analyzing the entire genomes of the patients and controls, four new HSCR-associated sites of the genome were identified. The study also revealed that specific constellations of DNA changes in the regulatory and the protein-coding regions of the genome provide a sensitized background that increases risk for the disease. By studying the cells generated from the stem cell-based HSCR model, the team have interconnected the DNA changes that increase the risk to disease with pathological pathways. In particular, dysregulation of an Alzheimer’s disease associated pathway was found in a subgroup of HSCR patients. Disruption of this pathway causes neuronal death, and that may account for lack of nerve cells in the colon of these patients.

In the last decade, the HKU research team has conducted various genetic and functional studies to explore the genetic basis of HSCR. The first whole genome genetic screen was conducted on 200 patients with HSCR and 408 healthy individuals to identify the susceptibility genes for HSCR disease.  The work was published in Proceedings of the National Academy of Sciences in 2009. Subsequently, employing further sophisticated computational and statistics methods, the team identified a discrete number of genes which interact with each other to cause HSCR disease. Subsequent studies using mouse models revealed that specific DNA changes in Patched (PTCH1) and Delta-like 3 (DLL3) genes lead to premature development of nerve-supporting cells, thus increase the risk of having HSCR by 278%. This research was published in Journal of Clinical Investigation in 2011, the top journal in the field of developmental biology. In 2015, the team identified several novel GLI mutations in HSCR patients. With the use of mouse models, the study directly demonstrated for the first time the coordination of SUFU-GLI-SOX10 genes in the formation of nerve cells and nerve-supporting cells in the bowel and that its perturbation leads to HSCR. The findings were published in Gastroenterology in 2015. Two years later, the team established the first human stem cell-based disease model for identification of novel disease-associated DNA changes, and elucidating how these DNA changes cause HSCR disease. The work was published in Gastroenterology in 2017. 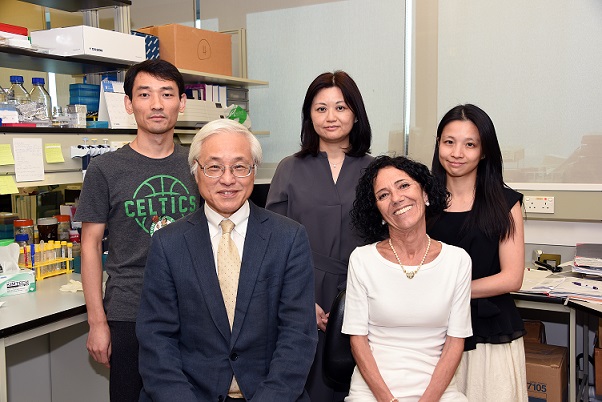