The Department of Family Medicine and Primary Care, Li Ka Shing Faculty of Medicine, The University of Hong Kong (HKU) conducted the first sexually transmitted infection (STI) population-based survey in Hong Kong in 2014-2016, found that the prevalence of Chlamydia trachomatis could be as high as 6% among the females aged 18-26 who reported having sexual experience in the past 12 months.  The prevalence was as high as 5% and 4% among the males aged 18-26 and females aged 40-49, respectively.  As the public awareness towards this disease is poor, together with the fact that the infection could be asymptomatic, even if they get infected, it might be unnoticed, thus no medical treatment would be taken, and further transmitting the disease to their sexual partners.  The infection could lead to serious health consequences such as infertility, or even congenital blindness and death.  The findings were published this February in the scientific journal PLOS ONE.

Chlamydia is a common bacterial infection caused by the bacteria of Chlamydia trachomatis, transmitted through sexual contacts with the infected.  It is the most common notifiable STI globally.  It is also the most common notifiable disease in the European Union and the United States.  Nonetheless, none of the STIs is notifiable in Hong Kong, thus the situation of Chlamydia trachomatis infection is unknown.

Chlamydia trachomatis increases the risk of HIV infection.  Serious chlamydial infection might lead to testicularitis, seminal vesiculitis, vasitis and infertility in males, as well as cervical mucositis, endometritis, salpingitis, ectopic pregnancy and infertility in females, if not treated timely.  If Chlamydia trachomatis is hidden in the body, even if successfully pregnant, the bacteria could be transmitted to the baby through birth giving, leading to chlamydia conjunctivitis or pneumonia.  Among those males infected with non-gonococcal urethritis and females infected with cervical mucositis, about half was caused by chlamydial infection.  Unfortunately, as many as 80% of women and 25% of men infected with Chlamydia trachomatis have no obvious symptoms, so the general public’s awareness of this STI is insufficient.  However, if the patient is treated early, chlamydia is not incurable, and the patient can be cured by taking an antibiotic prescribed by a doctor.  In addition, the use of condoms in every sexual contact can reduce the chance of infection.

Population-based Chlamydia trachomatis studies provide essential information for effective infection control and prevention, and have been carried out at regular intervals in some western countries.  However, it is the first time that the Health & Medical Research Fund supported a study of this kind of Territory-wide STI and Sexual Health Survey (TeSSHS) in Hong Kong, with the objective of investigating the Chlamydia trachomatis prevalence and risk factors among the 18-to-49-year-old Hong Kong residents.  Census boundary map of 2011, with 412 constituency areas, was used as primary sampling units to construct the sampling frame and, the residential buildings and units were randomly selected using geospatial environment modelling.  A team of interviewers were sent to recruit one subject aged between 18 and 49 years per household, using a computer-assisted personal interview (CAPI) questionnaire to get the responses on sexuality, sexual practice and general health questions.  The respondents were also asked to provide a urine sample for polymerase chain reaction (PCR) to test Chlamydia trachomatis and Neisseria gonorrhoeae.  Prevalence data was weighted according to the 2011 census and risk factors identified through logistic regression.

This study has successfully recruited and tested 881 participants (response rate of 24.5%). The overall Chlamydia trachomatis prevalence was at 1.4%, similar to those of the western countries, but among the young (18-26 years) women and men who had sexual experience in the past 12 months, the prevalence could be as high as 5.8% and 4.8%, respectively in Hong Kong.

In addition, a unique U-shape prevalence was observed with peaks in younger (18-26 years) and older (40-49 years) women in Hong Kong.  Dr William Wong Chi-wai, Clinical Associate Professor, Department of Family Medicine and Primary Care, Li Ka Shing Faculty of Medicine, HKU, who led the study says, “The U-shape pattern was also observed in human papillomavirus (HPV) studies in Hong Kong and it was speculated that many couples break up and seek for new partners in their later life resulting in more sexual partners and unprotected sex.”  Amongst the women with sexual experience in the past 12 months, the risk factors of Chlamydia trachomatis infection were: 25 times higher in younger age compared to the 27-39 years old; 9 times higher in those living alone and, about five times higher in those having partners who had travelled out of Hong Kong in the previous 12 months. 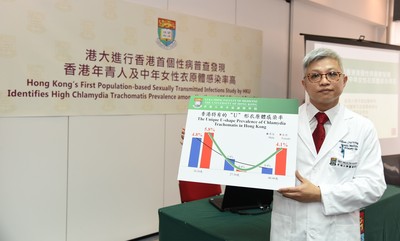 The Department of Family Medicine and Primary Care, Li Ka Shing Faculty of Medicine, HKU conducted the first sexually transmitted infection population-based survey in Hong Kong and found that the prevalence of Chlamydia trachomatis was high among young people and middle-aged females who reported having sexual experience in the past 12 months. 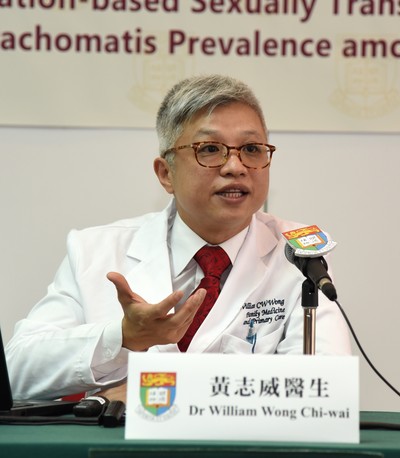 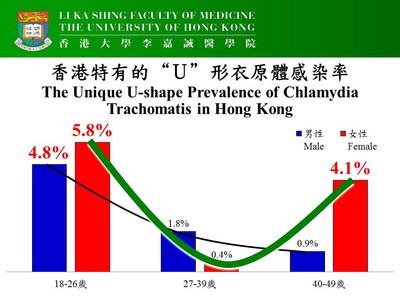 A unique U-shape Chlamydia Trachomatis prevalence was observed by the research team.