News
HKU School of Public Health announced its findings on the effectiveness of school closures in mitigating influenza B epidemic in Hong Kong, 2018

A research team led by scholars at the School of Public Health, Li Ka Shing Faculty of Medicine at The University of Hong Kong (HKU) evaluated the impact of school closures in mitigating influenza B epidemic and concluded that school closures around the peak of an epidemic would be most effective, and that the expanded school-based influenza vaccination programme has the potential to substantially reduce the impact of influenza epidemics.

Hong Kong faces influenza epidemics every winter and also at other times of the year. Earlier this year, there was a large community outbreak of influenza B, which raised considerable public concern. To mitigate the epidemic, the local government announced on February 7, 2018 that all 1,600 kindergartens, primary schools, and special needs schools in Hong Kong would be closed the following day, 1 week before the start of the Chinese New Year holidays. Thus in total, schools were closed for around 2 to 2.5 weeks. The study aimed to evaluate the impact of this intervention.1

Compared to past years, this is the third time in ten years that schools have been closed in response to influenza epidemics. In March 2008, kindergartens and primary schools were closed one week prior to the scheduled Easter break (therefore for 2 weeks in total), but this was towards the end of the influenza epidemic and there was no major impact of the closures on the influenza season.2 In June-July 2009, kindergartens and primary schools were closed around 1 month before the summer holiday to mitigate the impact of pandemic influenza A (H1N1) pdm09. This intervention was successful in reducing transmission,3 and the epidemic of H1N1pdm09 eventually peaked in September and October 2009 once schools reopened, with around 45% of children infected with H1N1pdm09 by the end of December 2009.

In the present study, the research team examined information on influenza activity in Hong Kong in 2018 based on local influenza surveillance data. It was estimated that school closures reduced transmission by 16% during that week. In order to interpret this estimate more easily, a simulation model was used to predict the number of infections would have occurred if schools were not closed, compared to what actually happened with the school closures. It was estimated that the school closures reduced the total number of influenza infections by 4.2%. It is likely that influenza-associated hospitalisations and deaths would have been reduced by a similar proportion.

In general, school closures would be most effective if they are implemented around the peak of an epidemic. However, it is difficult to forecast the pattern of influenza seasons, including when the peak will occur. Influenza vaccination is the best measure to prevent influenza virus infections, and the expanded school-based influenza vaccination programme has the potential to substantially reduce the impact of annual influenza epidemics.

This project was supported by the Harvard Center for Communicable Disease Dynamics from the National Institute of General Medical Sciences, a commissioned grant from the Health and Medical Research Fund from the Government of the Hong Kong Special Administrative Region, and the Research Grants Council of the Hong Kong SAR.

About the School of Public Health, Li Ka Shing Faculty of Medicine, HKU

The School of Public Health, Li Ka Shing Faculty of Medicine of The University of Hong Kong has a long and distinguished history in public health education and high impact research. With world leading research in infectious diseases as well as on non-communicable diseases of both local and global importance, the School has made significant contributions through its research and advocacy to improve the health of populations and individuals, both locally and globally. The School is a leading research and teaching hub in public health on influenza and other emerging viruses, control of infectious and non-communicable diseases, tobacco control, air pollution, psycho-oncology, behavioral sciences, exercise science, life-course epidemiology, and health economics, health services planning and management. This work has informed international (e.g. the World Health Organization, Food and Agriculture Organization of the United Nations), national and local public health policies. 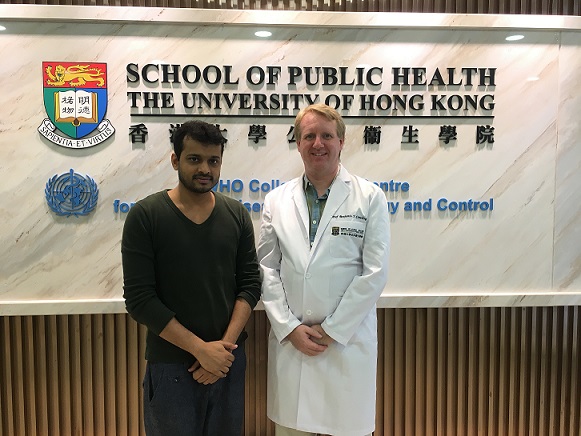 Professor Benjamin J Cowling (right) and his research team announced their findings on the effectiveness of school closures in mitigating influenza B epidemic in Hong Kong, 2018.