Shanghai’s health commission recently added aerosols to the list of possible modes of transmission of the new coronavirus (SARS-CoV-2,
previously known as 2019-nCoV), shortly after which, news broke that a family in Hong Kong had been infected with SARS-CoV-2 after sharing a hot pot meal. Since then, there have been many questions on whether hot pots, a staple in local cuisine, can pose as a risk for transmission and infection. Our team of researchers at the School of Public Health, HKU Medicine addresses some of these concerns.

Q1. What are the suggested modes of transmission of SARS-CoV-2 thus far?

To preface, respiratory viruses (for example influenza viruses and coronaviruses) are usually transmitted via the following modes:

Touching your eyes, ears or nose after:

These large droplets fall to the ground quickly, so the transmission of viruses in these larger droplets are usually limited to a short distance.

Through fine particles within the respiratory droplets of a carrier or patient, usually expelled in large amounts when they sneeze or cough. Their smaller particle size (usually believed to be smaller than 10 microns) allow them to remain suspended in the air for a longer period of time, increasing its likelihood of traveling long distances. Patients may get infected through the inhalation of infectious particles in both close proximity and long distances. 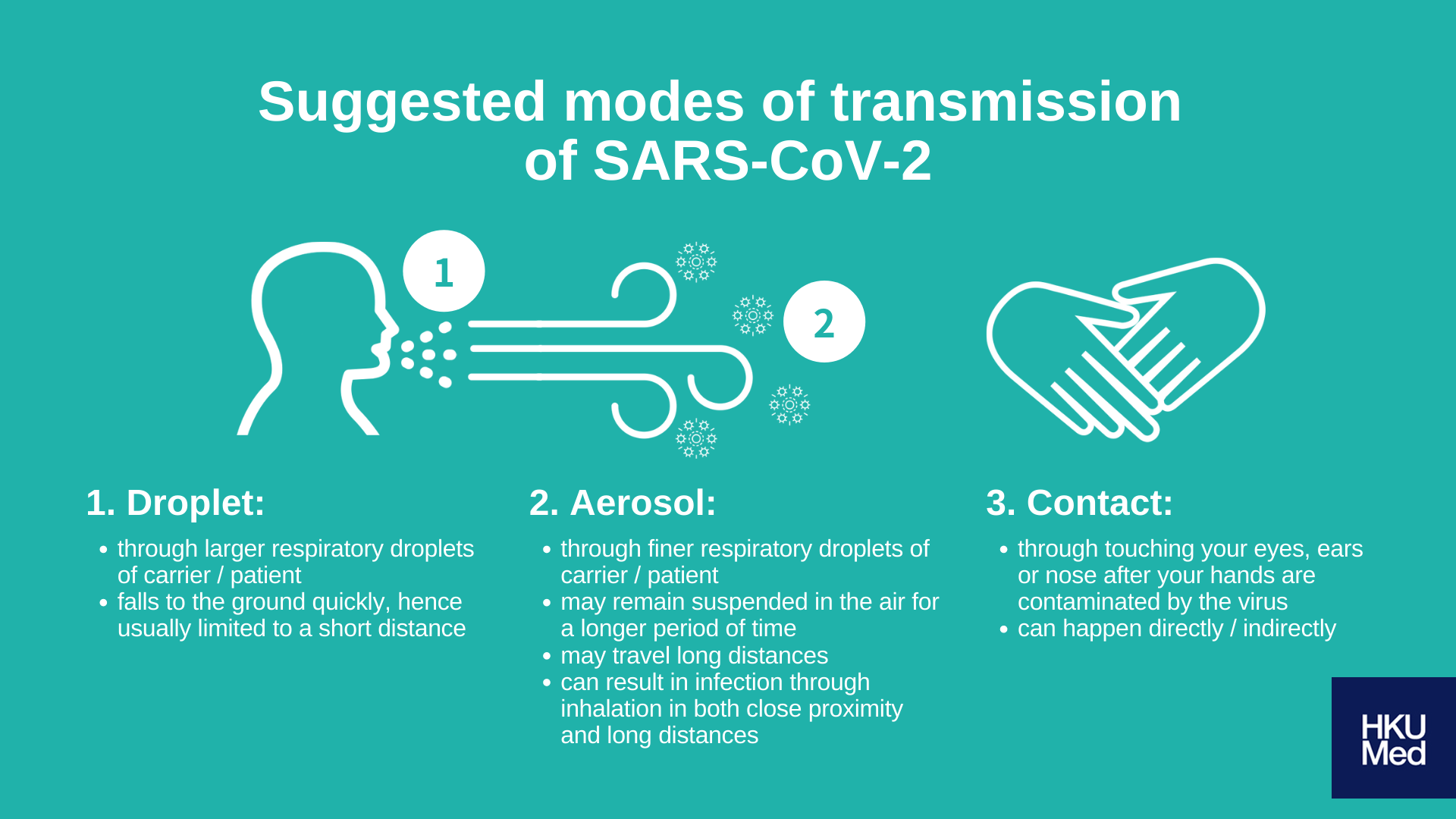 Q2. How are aerosols formed?

Aerosols are the suspension of fine solid particles or liquid droplets in the air, and is not visible to the human eye. Daily consumables such as detergents and fragrance sprays are used in the form of aerosol; aerosols can also be generated from daily activities such as opening and closing doors, flushing toilets, use of shower heads, hot water faucets, indoor air humidifiers and massage pools. 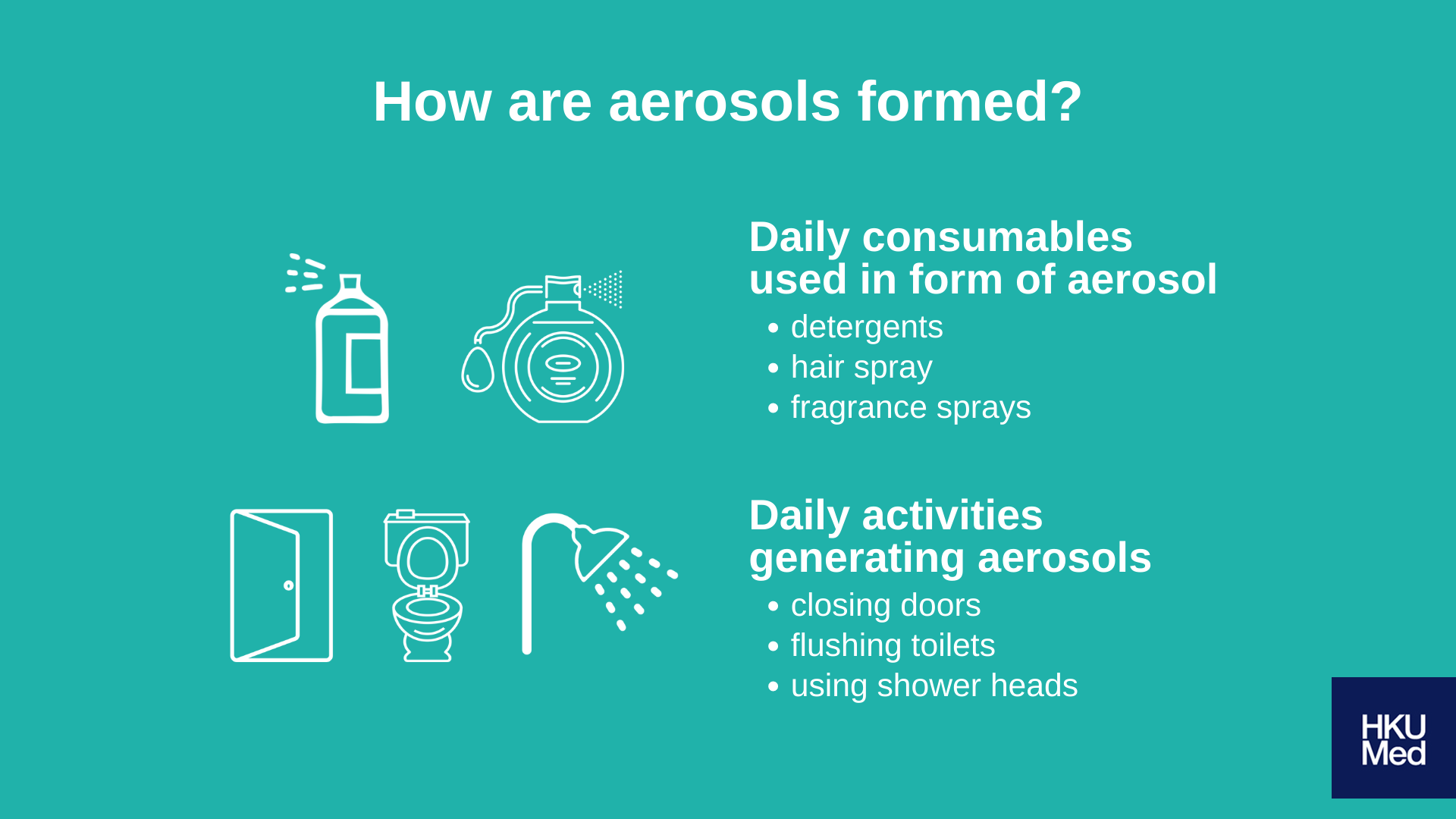 Q3. What is its relationship with bio-aerosol that have transmission potential?

It is important to note that aerosols are not infectious on its own; it only has transmission potential when mixed with droplets and/or secretions of a carrier or patient, becoming what we call bio-aerosols when it contains infectious pathogens within.

Bio-aerosols containing pathogens usually occur in medical settings only, wherein medical procedures and treatments such as sputum suction, tracheal intubation, the use of a ventilator, or removal of dental calculus are administered to a carrier or patient. In such circumstances, large amounts of aerosols mixed with the patient’s secretions including respiratory droplets and aerosols are produced, thereby increasing likelihood of infection especially among caregivers and medical personnel. 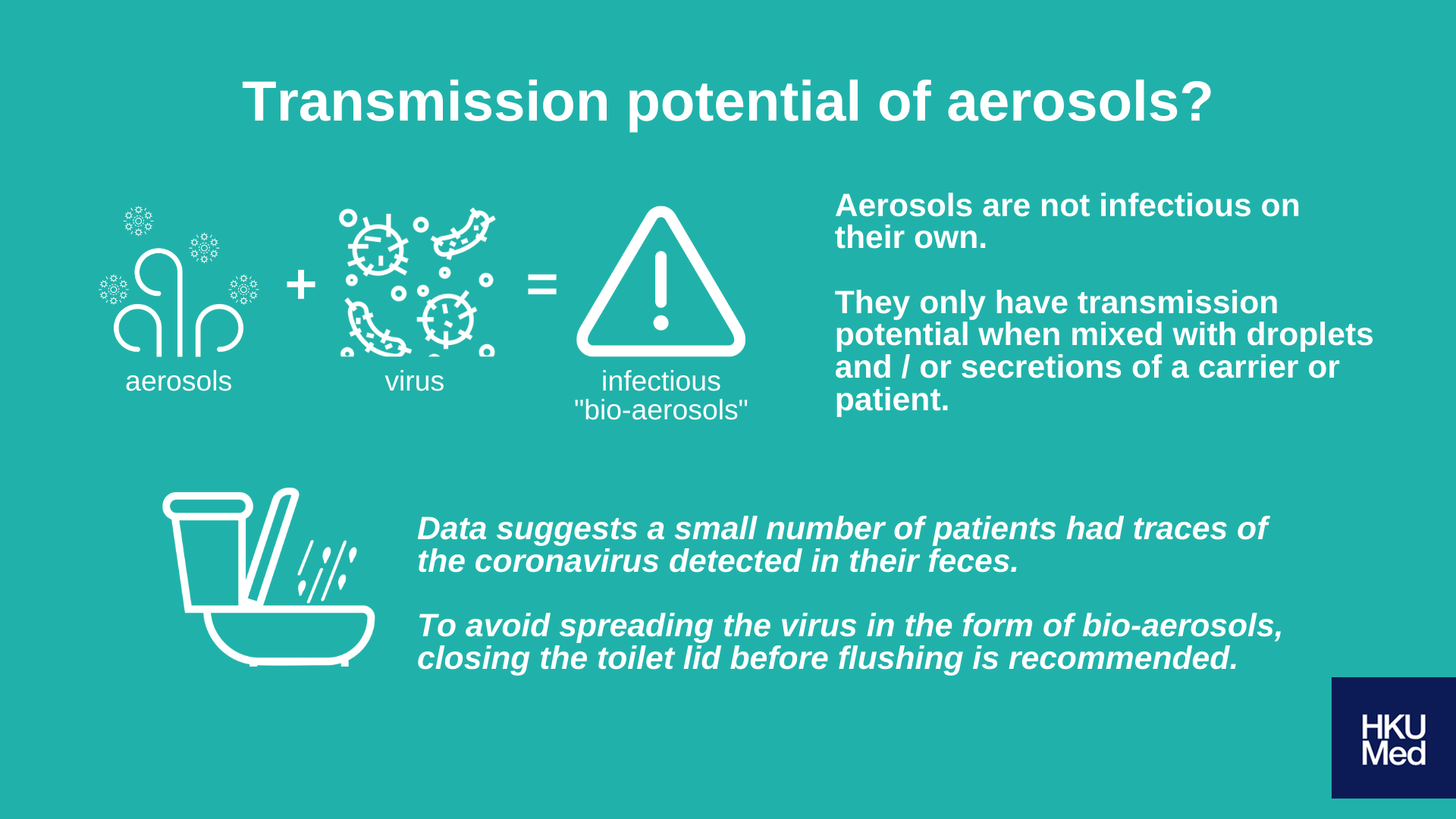 Q4. What are some activities in our daily life that would increase our exposure to bio-aerosols?

If there are no carriers or patients, or no contaminated objects or surfaces nearby, there should not be an increased risk of disease transmission via bio-aerosols. Moreover, compared to bacteria which can survive independently in the environment, viruses can only survive and replicate by infecting other cells. As such, using a steam iron for example in an environment where viruses may be present in dust particles is still relatively safe, as the survival chances of viruses in the environment and subsequent likelihood of transmission through aerosols are both relatively low.

On the other hand, since it is believed that flushing toilets would generate aerosols, together with current data which suggests diarrhoea as a possible symptom of SARS-CoV-2 and a small number of patients having the virus detected in their feces; it is recommended to close the toilet lid before flushing to avoid spreading the virus in the form of bio-aerosols.

Q5. Carriers of SARS-CoV-2 may not show any visible symptoms, while bio-aerosols are also invisible to the naked eye. Are the risks of infection prevalent in our daily life?

Similar to other routes of transmission, transmission risk via bio-aerosols is dependent on the concentration and viability of the viruses during inhalation. If there is a low concentration of viruses in inhaled particles, or if there are very few viable viruses remaining at the time of inhalation, chances of infection would be unlikely. In addition, although bio-aerosols can spread across a long distance, it is likely diluted and inactivated by other environmental factors while traveling; bio-aerosols are hence more likely to cause infections when inhaled in close proximity.

In summary, the risk of infection by way of aerosol transmission is relatively higher for medical personnel who need to perform aerosolised medical procedures, but significantly less so for the general public.

Nevertheless, the concentration of virus-carrying bio-aerosols generated by breathing, coughing, or sneezing of carriers or patients will accumulate if they are within a narrow and poorly ventilated space; the probability of infection will be very high for people in close proximity. As such, large congested crowds should be avoided during times of an outbreak. 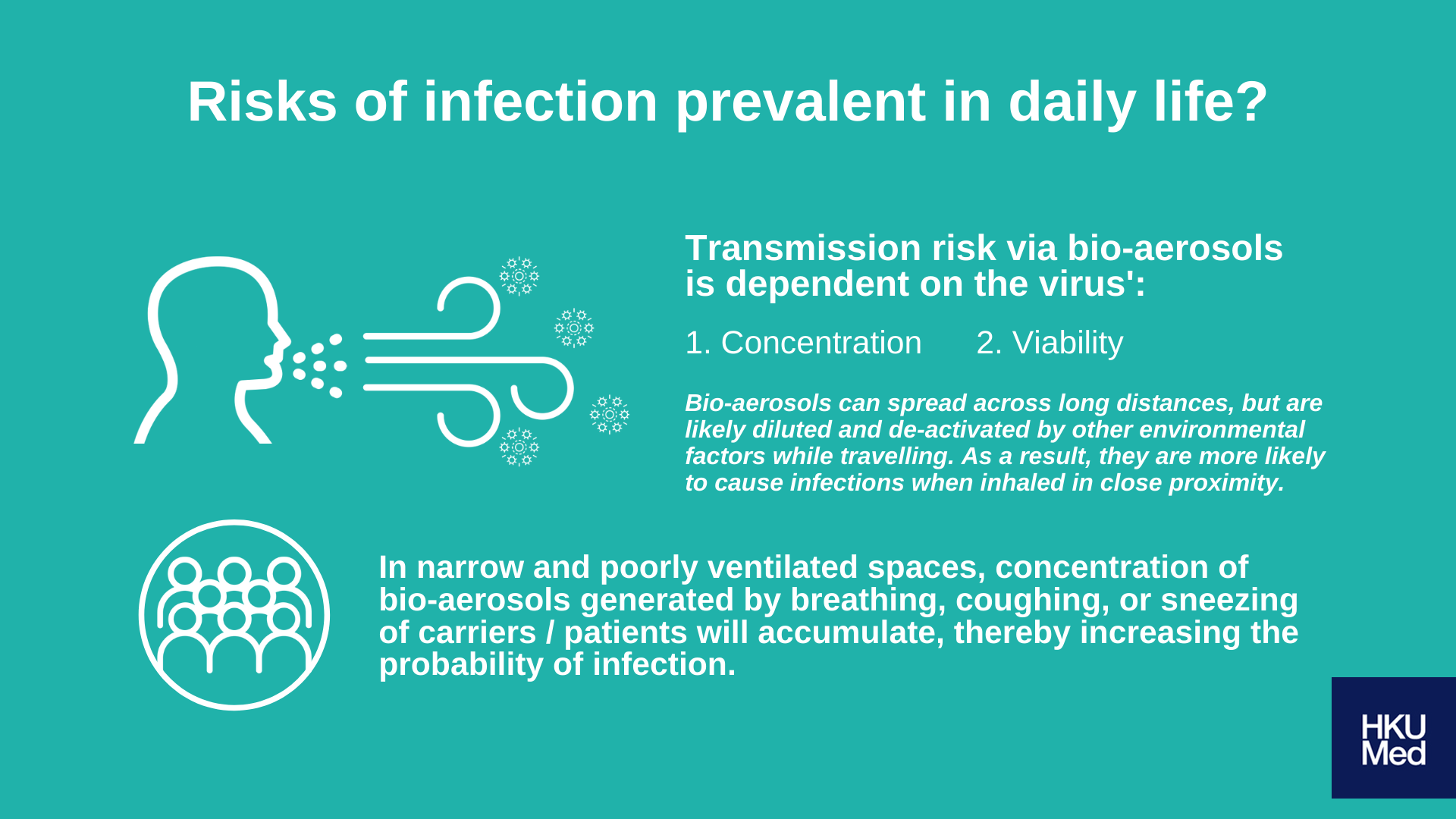 Q6. Can we still have hot pot at this time?

It is difficult to state in definite terms whether there is an increased risk of aerosol transmission of SARS-CoV-2 while having hot pot (in comparison to other known respiratory diseases), as very little is currently known regarding the mechanisms of its transmission via bio-aerosols. However, infections brought about by communal meals such as hot pots may implicate more than one mode of transmission.

For example, direct or indirect contact of droplets may be caused by close proximity of individuals in a dining setting, the use of shared utensils, or even just coming into contact with the table where larger droplets may fall on. From this, we may deduce that transmission of the coronavirus and other communicable respiratory diseases may be multimodal, even if aerosol transmission is not a contributing factor to increased risks. As such, large social gatherings such as hot pot or other comparable social activities are not recommended during this time.

Numerous public health protocols have also highlighted various forms of social distancing as an effective method in reducing chances of respiratory virus transmission. One should avoid going out unless absolutely necessary and remain home, and maintain a high level of personal hygiene (i.e. frequent hand hygiene and wear a mask if you are experiencing any symptoms) in order to minimise risks of infection. 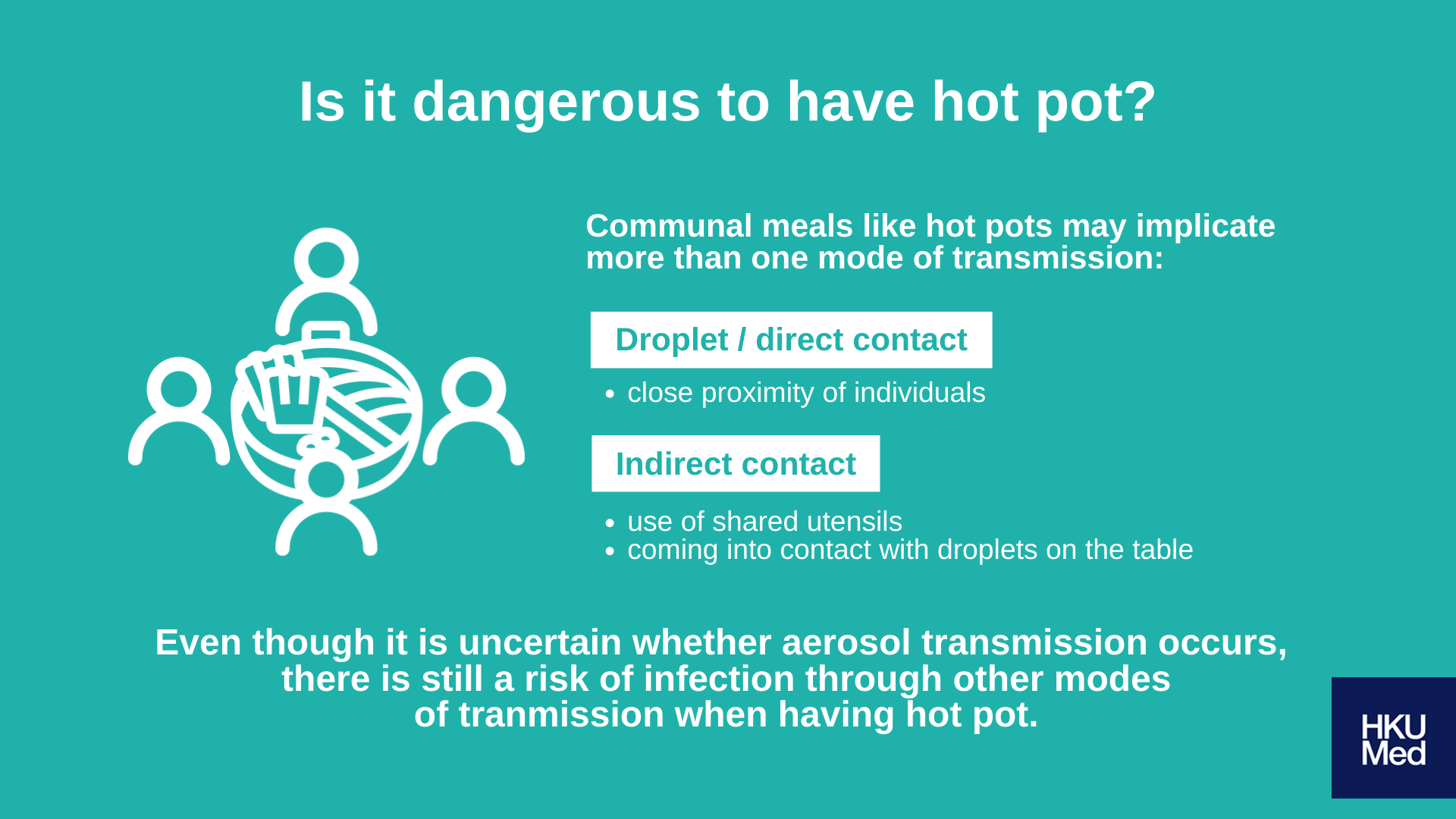