Feature Story
From Internal Medicine to Patient Support Groups, It Was Fate That Paved His Way

From Internal Medicine to Patient Support Groups, It Was Fate That Paved His Way


Whether the choice is to focus on orthopaedics, paediatrics, cardiology, gastroenterology, or even hepatology, many medical students choose their specialisation during their practicum or internship. Looking back at his 30 years of experience however,Professor Lau Chak-sing, Head of the Department of Medicine, Daniel C K Yu Professor in Rheumatology, and Clinical Immunology Chair of Rheumatology and Clinical Immunology, reckons that his choice simply came down to fate.

Professor Lau read for medicine at the University of Dundee in Scotland. During the summer of his third year, he was given a choice to stay in the UK or return to Hong Kong. He ended up choosing the UK.

During that summer, he was exposed to a daily dose of tongue-lashing by a surgeon he studied under, which Professor Lau believes caused him to develop an aversion to surgical studies, indirectly pushing him to specialise in internal medicine instead. Besides,he also admired the intellectual rigour of internal medicine, having to carry out diagnosis and subsequent analyses through examining a patient’s medical history.

Recalling those days when he was contemplating what to specialise in, Professor Lau said while laughing, “This might offend people who specialise in surgical studies, but back then I just found internal medicine more exciting, and I felt it required more thinking; it needed me to be smarter”.

Having met numerous patients afflicted with leukemia, Professor Lau at the time considered specialising in haematology, but because of the limitation of medications in those days, he unfortunately witnessed many patients succumb to cancer. Experiencing the constant heartache and pain, he instead considered specialising in cardiology and doing operations like cardiac catheterisation. But one day, he was given an invitation to take part in a research project on rheumatology, and it was then that his future was decided.

In addition to being a faculty member at HKUMed, Professor Lau is also currently the president of the Hong Kong Academy of Medicine. He believes that medical specialisation in Hong Kong, while excelling in areas of knowledge and technical skills, is lacking in the areas of ethics, humanities and professionalism. Even though medical schools in Hong Kong have already incorporated professional ethics as part of its curriculum, he believes veteran doctors should constantly remind themselves of the need to treat patients with respect and care.

Professor Lau believes for a doctor, “ the most important thing is for you to enjoy working with people”. For doctors to be at their best, his belief is that not only do they need to communicate well with patients and their families, they must also work well in a team.

Coming from a background rooted among the grassroots levels of society, Professor Lau believes in the importance of gaining life experience, and how it helps to communicate with patients. “If students were to endure some hardship, it would help them better empathise with other people’s struggles,'' said Professor Lau.

Professor Lau believes that under the current public health system in Hong Kong, colleagues working in the field are under tremendous stress. He feels veteran doctors should seek ways to help younger colleagues in reducing the number of cases of burnouts and the possibility of becoming fed up with their job. His suggestion for his colleagues in the field is to listen to the younger colleagues, understand how hospital resources are distributed, explore ways to improve, and find channels to gather feedback, all of these can be started by veteran doctors.

“You have no control” 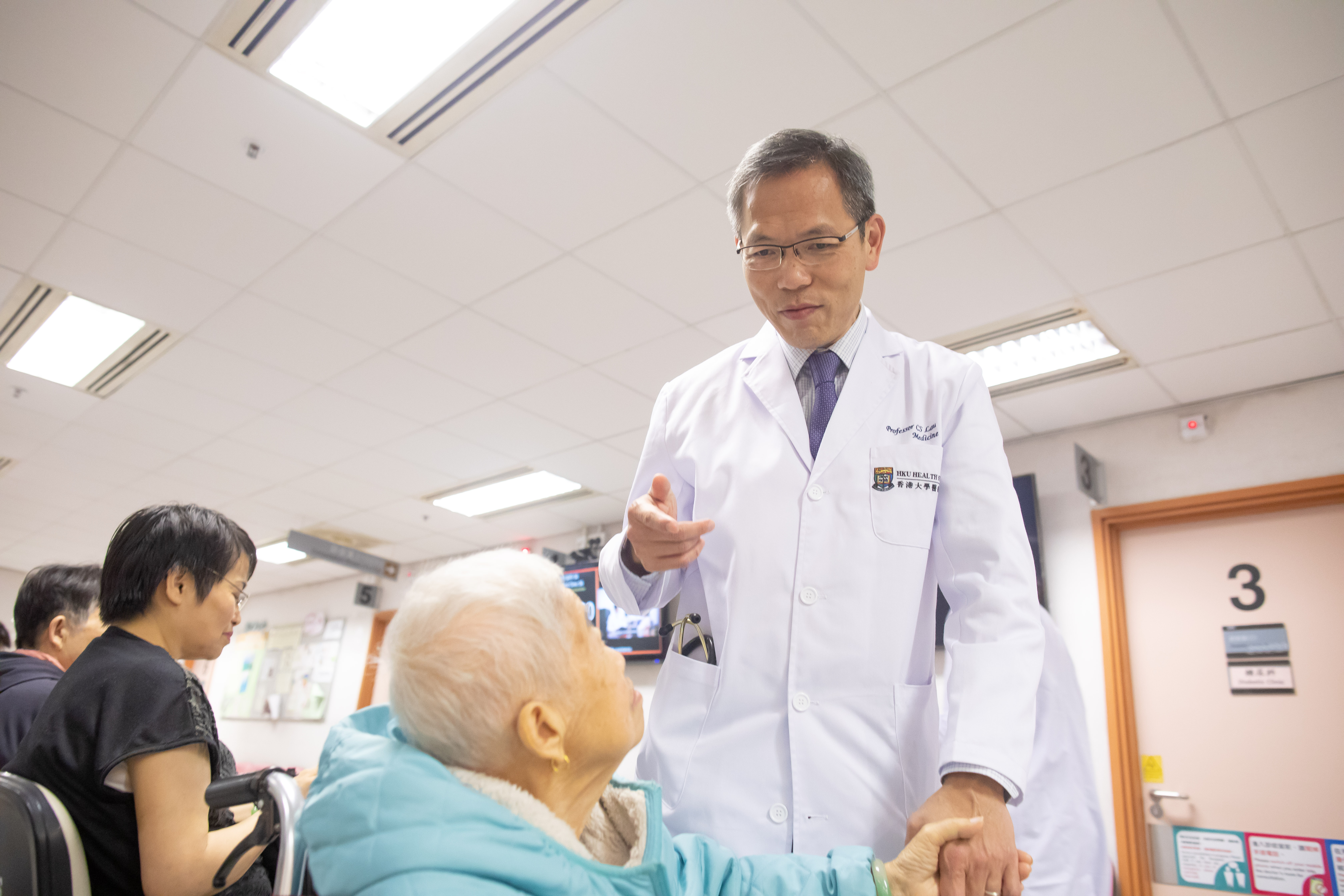 Despite being familiar with the hospital environment, and frequently traversing the hallways of the hospital, it was when Professor Lau switched roles when he understood how patients would feel helpless.

As the head of the department of medicine at HKUMed as well as being an expert in Rheumatology and Clinical Immunology, Professor Lau keeps the word “empathy” close to heart. He says despite advances in medicine, and medical practitioners more knowledgeable about medicine affects patients, he still believes that medication is not the most important element. Instead, how a doctor cares for its patients is the most important factor to being a good medical practitioner. When patient support groups were established, the reason for its development was adhering to the idea that doctors “don’t only cure diseases, but also cure patients”.

Back in the familiar hallways of the hospital, Professor Lau’s role reversal as a patient, his experience only reaffirmed his belief that as a patient, “You have no control,'' he said.  It’s this moment he understood how patients feel helpless.

Professor Lau is well known for the impact he has made on the medical field in Asia through his research in Systemic lupus erythematosus and genetics, but another aspect of greater interest may be his commitment to patients. Over the years he has contributed to the creation of patient support groups and he has always encouraged patients to ask each other for assistance. During his studies in the UK, Professor Lau noticed a number of patient groups. It was then that he vowed that after his return to HK, he would help establish similar patient groups in Hong Kong.

That came to fruition when In 2001, he helped establish the Hong Kong Arthritis & Rheumatism Foundation, a foundation that helps provide lower cost medication to patients. Not too soon after, the foundation also establish a research grant to help further treatment for arthritis in Hong Kong.

Professor Lau says patients with arthritis and rheumatism understand the limitation of medical treatment, and sometimes what they are seeking is the care of a doctor. At the sametime, he feels the simple acknowledgement from a patient is priceless.

During the interview for this story, while conducting the doctor’s rounds, its obvious Professor Lau’s voice is easily recognizable to patients. One patient asked loudly, “ Hi Professor Lau, it’s been awhile since we’ve seen each other”. To Professor Lau Chak-sing, that simple warm greeting is what makes it all worthwhile.

*The original story was published under HK Guardians in Chinese on HKUMed Facebook.